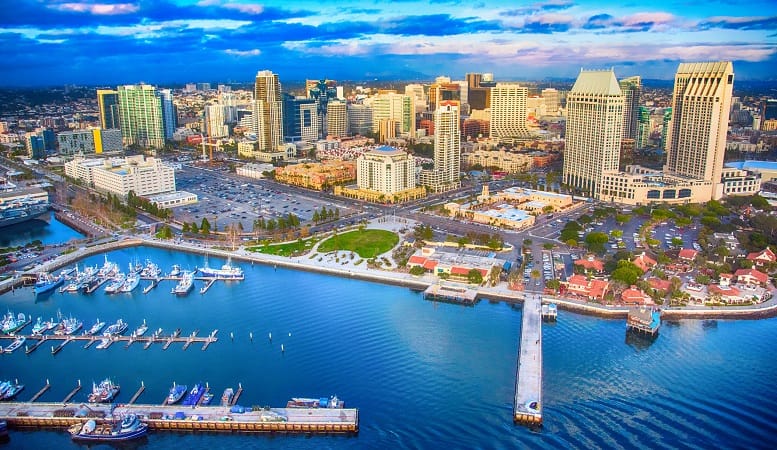 San Diego is not called America’s Finest City for nothing. It is one of the cities with the highest life quality in the country and the real state market on it is always booming with people looking for an opportunity to move into this beautiful city. So how much is a house in San Diego?

San Diego has been historically one of the most expensive cities when it comes to real estate, and that trend continues to this day.

However, investing in acquiring a housing in the region, even amongst the high prices, is considered one of the best real estate investments you can do.

So let’s discuss why exactly that’s the case and talk about the cost of housing in the city.

Cost of Housing in San Diego

At the time this article was written, February 2022, the average cost of housing in San Diego reached a figure of $617,000. That is an astonishing 24.5% increase in cost over the past year.

Over the last decade, the price of houses in the city have risen 82%. And if we look even further, way back 35 year ago, the inflation in San Diego reached about 3.70% per year.

When compared to the 2.60% of the country average, that shows that living in San Diego is a tidy bit more expensive than your average city.

So why is that the case? Why the cost of housing in San Diego is more expensive than the average, and why is it still worth investing in it?

What Influences the Cost of Housing in San Diego?

The reason for the high cost of housing in San Diego can be summarized into one simple question: quality of life.

Ever since its conception, San Diego has been a prime region to live. This is dues to the fantastic weather conditions, considered to be one of the best in the entire country, the booming social life and the ever-growing job opportunities in the city.

In time, this highly sought after environment created an unbalance in the supply and demand of houses in the city.

In one side of the equation, the city authorities developed safety measures to ensure controlled growth and maintain the high quality of life in the city.

Those measures, over time, made it difficult for houses to be built fast enough to meet the demand of people who still wanted to move in to the city.

Also, with the sea right at the doorstep, land to develop started to become scarce, which contributed to slow the development.

Recent studies have shown that around 180,000 new housing units should be built every year to keep up with the demand. However, not even half that amount has been reached over the past 10 years.

This slow inventory rate has made the market very competitive, and the people who were willing to pay more in a biding war, usually left out victorious. That, over the last decades, have spiked the cost of houses in San Diego.

Is it Still Worth it to Invest in a House in San Diego?

Yes. Very much so.

All those factors that influence the price of housing in the city are unlike to change over the nest years.

Again, there has been an increase of almost 25% in the price of houses in the area over the past year.

And, what might be even more surprising, is that prices are expected to continue rising in the next years. There’s really no end in sight to when prices will drop.

So, if you’re thinking about acquiring a house in San Diego, this urges to act fast for two reason.

First, prices are not expected to drop. So the quicker you move, the more chances you have of finding a house that fits your budget.

Second, you’re missing an investment opportunity. Prices are sure to rise once you acquire a house, so the quicker you buy one, more time in will have to increase in value.

So hopefully by now you’ll have an idea of why the San Diego housing market is more expensive than the national average.

And also, why even with an average house price of $617,000, almost 2,5 as high as the national average, is it still a good investment overall.

If buying a house in San Diego is something you’re seriously considering, we highly recommend you start looking into it as soon as you can.

And we here at The Real Estate Jedi would be happy to help you with that. We’ve been working with real estate in the region for the past 14 years, with a high satisfaction rate from our customers.