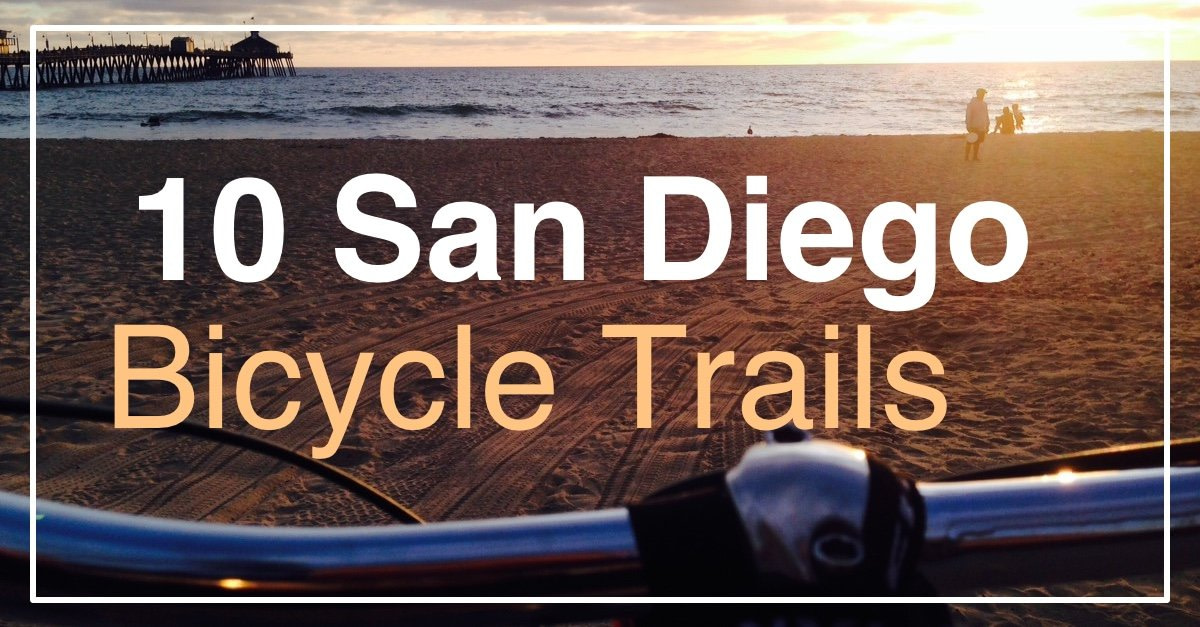 “You can’t buy happiness, but you can buy a bicycle and that’s pretty darn close.”

-Anyone with a bike.

If living in San Diego doesn’t already instill happiness in your heart, aside from consulting with a psychologist, our next-best suggestion is to grab a bicycle and explore our gorgeous region in a way that provides freedom like no other: on a two-wheeled peddling machine.

San Diego and its surrounds offer some of the best recreation and scenery in the world. For many people, the best way to experience this beauty is on their bike. More than that, San Diego County is one of the most cycle-friendly regions in the country (rated higher than New York City and Los Angeles) with many commuters choosing to pedal to work.

Whatever your reason for filling your water bottle, dusting off your saddle and testing your brakes, these are some bike paths to explore around San Diego that you just don’t want to miss.

You’ll find the San Luis Rey River Bike Path in the city of Oceanside. The first seven miles is Class I; you’ll only ever share the pavement with pedestrians. If you take the extension onto the street, you can pack in another two miles. And, if you double back, it’s the sort of cyclist workout sure to satisfy.

Park at Carmel Country Road for several miles of Class I bike path. You can extend your ride along a Class III path where you’ll be wowed by views of the canyons and mesas alongside. And, there are plenty of places to refuel before taking the Highway 56 Bike Path back to your car.

This is actually a stretch of the Old U.S. 101 route which extends past the military base at Camp Pendleton, but this path certainly makes it easier to enjoy the famous Pacific Highway. Due to increased security, access from the Las Pulgas gate to the Main gate (or vice versa) is restricted those without military passes. However, American cyclists can apply for a one-year bike pass, subject to security screening. Passes must be applied for at least seven days in advance, and the complete path can be found here.

For a trail with observable wildlife throughout, try the San Diego River Trail. This route extends approximately 6 miles and even offers access to Fashion/Mission Valley shopping. This path also links to other paths, placing more than 20 miles of trails throughout the nearby parts of San Diego at your disposal.

The official bike path extends for just over a mile and presents an easy, scenic route between Mission Bay and UC San Diego. But, it’s only part of the Rose Canyon Trail which features a few hills and is only suitable for mountain bikes. You can access Rose Canyon Bicycle Path from Santa Fe Street or Gilman Drive.

A bike path extends from Ocean Beach Dog Beach to Mission Valley along the channel. If you’re cycling with out-of-town guests, this is the perfect route for them to get a feel for San Diego’s beach scene. And, if you cross over to Old Sea World Drive, you can easily ride for more than 11 miles.

Heading north from Mission Valley is relatively simple using the Murphy Canyon Bike Path – unless it’s been storming. Then, you can expect some flooding near Friars and San Diego Mission roads. Otherwise, this Class I bike path runs from the parking lot of the Qualcomm Stadium to Murphy Canyon Road.

You can spend as much or as little time as you like cycling the paths around Mission Bay Park. The 4,600-acre aquatic park has four miles of shared pedestrian and bike paths. But, you can add five miles if you want to cruise the outer loop of Fiesta Island. Or, continue past Sea World along West Mission Bay Drive around the tops of Mission and Fiesta bays for an pleasantly flat ride.

A prime spot for birdwatchers, nature-lovers and those wanting to explore some lesser-known parts of San Diego, the Tijuana River Valley Regional Park in South San Diego is a ride you don’t want to miss.  While you will share trails with pedestrians and equestrians, this is an nearly-secret getaway from the crowds found elsewhere!

NOTE: Not all trails are bike-friendly— be sure to check the map!

If you do only one bike tour in San Diego, this is the one for you. The 24-mile path extends from Coronado, South along the Silver Strand, with the Bay on one side and the ocean on the other, then East through Imperial Beach and back up to San Diego Central. You won’t be able to bike across the Coronado Bridge (unless you participate in the Bike the Bay Ride in August), but at least 13 miles of this path are car-free. This route features incredible views, a relatively flat, even ride, and tempting places to stop off for a bite to eat or even a swim in the ocean.

Distance: 24 miles (semi-round-trip— must take a ferry between start and finish points)

Remember, wherever you go, you’ll want to check the path ahead of time so you can make safety decisions before your ride. Anyone under the age of 18 must wear a helmet; and even if the laws don’t require it, protection is advised for all riders.

Now, it’s time to fill that water bottle and put the rubber to the trail, isn’t it? (Don’t forget your sunscreen!) Happy riding!